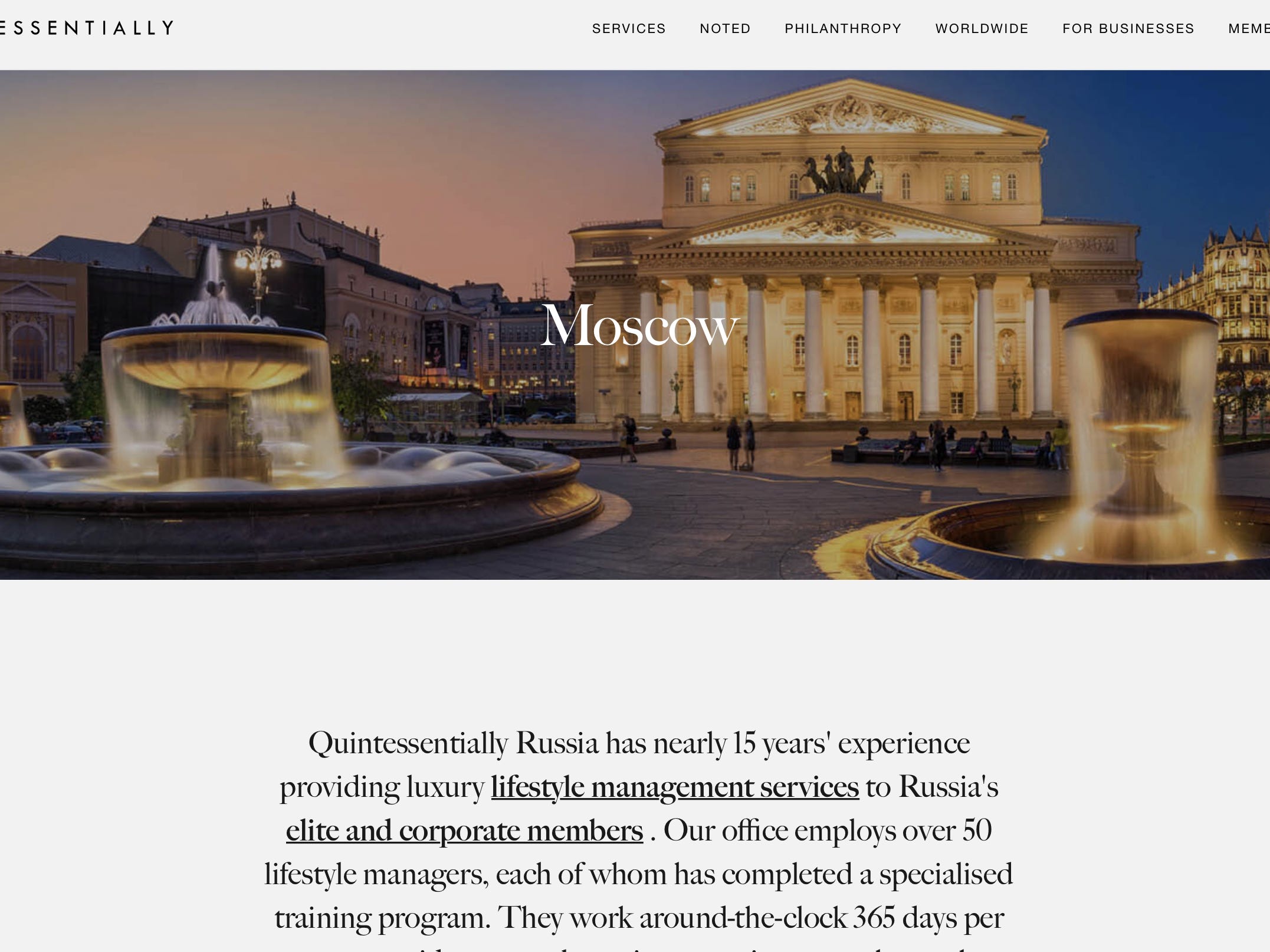 Andrei Pavlov, who was sanctioned for his involvement in the infamous $230 million criminal plot that Sergei Magnitsky was investigating before he died after being denied medical assistance in Russian police custody, told Andrei Kravchenko that he had arranged a one-year access to Quintessentially.

Quintessentially has increasingly been in the spotlight due to Elliot’s role as a fundraiser for the Prime Minister and as a Conservative party official. However, his stance is a cause of growing unease among Tory MPs, who fear his “contaminating” Russian links.

Pavlov told Kravchenko, then deputy prosecutor general of Kazakhstan, that clients benefited from “personal connections”, including the possibility of “arranging a dinner with Tony Blair or obtaining an invitation to the Oscars”.

In a 2014 email to the prosecutor, seen by Insider, Pavlov said: “There is a charge for this service, but given our agreement with them, we have agreed that one year of Quintessentially membership will be free for you. .”

Kravchenko would receive a higher level of membership, Pavlov added, in which “the client is assigned a personal manager who provides a more ‘personal’ service, as he ultimately learns the details of the client’s life, needs, etc. .”.

“Involved in serious cases of corruption”

It’s unclear whether Kravchenko ever accepted the offer, but in the same email chain he asks for clarification on “how you negotiated my membership” as well as how much it will cost Pavlov and himself. “I don’t want to sound stingy on this issue,” he added. “I certainly have the ability to pay for some things I need, but I have to figure out what I’m signing up for.”

This is just one of a series of emails from Pavlov, which have been leaked and posted online, following what he described at the time as a hacking attack .

The leak led to a flurry of media coverage, including reports that Pavlov had hired Lynton Crosby’s lobbying and elections firm CTF to identify targets in the European Parliament who could be persuaded to stop him from being sanctioned by the EU, as reported by BuzzFeed News. The CTF said at the time that the project was background research and not related to lobbying.

Last September, the Mirror reported on Pavlov’s use of Quintessentially.

In 2018, Ulukbek Maksatbekuulu, the senior assistant to the Prosecutor General of Kazakhstan for special missions, was found guilty of receiving bribes “in the form of large-scale real estate benefits”, from Pavlov four years earlier. He received an eight-year sentence; Pavlov was released by Kazakh authorities without charge.

British government document explaining sanctions describes Pavlov as part of ‘an organized criminal group [that] was involved in serious corruption,” alleging he helped the group make fraudulent claims for damages.

Pavlov told Kravchenko he uses the service “constantly”, although his email indicates he does not know senior management “well”.

Emails seen by Insider suggest Pavlov was using Quintessentially’s services after he was added to the European Parliament’s “Magnitsky List”.

The attorney spent four-figure sums on English lessons, hotel trips and luxury car rentals, according to a series of other documents seen by Insider.

They also suggest he spent nearly £3,000 on the education division of Quintessentially, helping his son with his application to private Brockhurst preparatory school.

Pavlov used the concierge service for more prosaic reasons, including finding his wife a Hermes bag and having a Kindle sent to his hotel in Los Angeles via Amazon, the documents suggest. He also used Quintessentially to find a hairdresser for his wife “someone who cut Diana and Charles – costs £300”.

Bill Browder, the American businessman who campaigned for the Magnitsky Act, told Insider that he finds it “shocking that a British company is helping a Russian organized crime figure, allowing him to improve his style of life”.

In essence, membership was “considered a gift of great value” among Russian elite circles, Browder added. “It’s like a black American Express card – even better.”

David Bick, president of Quintessentially, told Insider that his company had not been involved in discussions with Pavlov about free membership for Kravchenko, and no one had agreed to waive the fee.

He declined to comment on specific members, but added: “Substantially compliant with US, EU and UK sanctions lists and none of its members are currently on those lists. If a member appears on these lists, they will immediately cease to be a member of Quintessentially.

When asked if Pavlov had ever been a member during the time he was sanctioned, Bick replied, “Completely not.”

A spokesperson for Tony Blair said: “Mr. Blair has never heard of Quintessentially, let alone attended any dinner parties hosted by them. He does not know Andrei Pavlov and has no memory of ever meeting him, nor do we have any record of such a meeting. If, as you claim, he offers to arrange a dinner with Mr. Blair, he does so without his knowledge and permission.

Insider has reached out to Pavlov and Kravchenko but has not received a response as of press time. CCHQ declined to comment.

In a 2013 interview, Quintessentially Russia president Irina Volskaya told a local website that the company’s slogan was “access to the unreachable” and that the company was engaged in “everything which does not contradict the law”.

Bick said, “Quintessentially had a franchise office in Moscow and that franchise’s license was suspended following Russia’s invasion of Ukraine.”